The 14-3 Fort Recovery Indians have enjoyed almost two weeks in the driver’s seat of the Midwest Athletic Conference standings, and a victory over St. Henry this Friday will secure at least a the share of the conference trophy with a monster game in the final week with Marion Local looming.  Head coach Brian Patch understands the importance of the final two league battles, but is taking them one at a time.  “Our seniors have done a great job of keeping the team focused and repeating the message to one another,” he explained.  “All year long they have been focused on one team at a time – we don’t mention or prepare for Saturday’s night game until Saturday.  We created that mind set early in the year so now it is no different for us.”

The Indians, who are currently riding a wave of ten wins in their previous 11 outings this season, are looking to snap a four-game skid over the past three years against St. Henry.  The Indians had won ten straight this season before a setback last weekend against Clayton Northmont, but that defeat wasn’t one that Patch wants his players to dwell upon.  “We don’t talk about winning or losing – that way no matter who we play we feel that if we execute our game plan individually and collective as a team that winning takes care of itself.  We never want to lose a game, but losing on the road on a Saturday night to a Division 1 team isn’t devastating to us at this point.  We know we didn’t play our best game, but at this point we just move on and get ready for the next game.”

This season, the Indians have been led by senior Elijah Kahlig, who is one of the tops in the conference with more than 22 points and seven rebounds per game, including more than 40 three-pointers.  The Indians game-plan goes deeper than just Kahlig though – they have three other players who are averaging nearly double-figures in the scoring column each game as Patch has been getting noticeable contributions over the past few weeks from Brandon Schoen, Kyle Schroer, and Ben Dilworth.  “Fort Recovery plays excellent defense, they are tireless workers, and they are very, very good at getting to their spots on drives, which leads to easy lay-ups, pull-ups, or open jumpers for their teammates,” St. Henry head coach Eric Rosenbeck praised.  “Elijah Kahlig is my favorite player I have ever coached against – he is awesome and does things the right way.  He doesn’t show boat, he picks up/helps his teammates, he is unbelievably fundamental and works like crazy to get better every year – most important, he is a leader.”

The Redskins enter Friday’s battle out of contention for the league title, but Rosenbeck and his players understand a victory over the Indians would put a wrench in the title race while giving an outstanding shot of momentum heading into the upcoming post-season.  At 12-7 overall, the Redskins have won five of their last six games and are led in scoring and rebounding by Ryan Mikesell who is hitting for more than 22 points per game while snagging a league-best 9.2 rebounds each time he takes the floor.  “We made a few adjustments to our defense to allow Mikesell to hang around the rim more,” Rosenbeck pointed out.  “He is an excellent shot-blocker and he alters multiple shots a game as well. We have also made more of a commitment to being solid on defense instead of trapping as much as we did earlier in the year.  We have talked about getting better and growing as a team – we are nowhere near a finished product and we only have three games left in the regular season.”

Following a loss to Delphos St. John’s two weeks ago, St. Henry has strung together four straight victories in league play against New Bremen and Parkway and non-league wins over Western Buckeye League opponents Celina and Van Wert.  “St. Henry is a good team – obviously Ryan Mikesell stands out as being a player who can beat you himself, but they also have had other guys step up with big games to help ease the scoring from Mikesell,” Patch remarked.  “Defensively they have run a lot of things so we will have to be prepared for anything they throw at us in order to come away with the victory.” 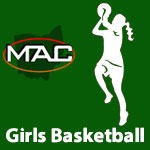 During Fort Recovery’s victory over Minster on Friday night, there were times it was difficult for Indian fans not to acknowledge what was being announced over the loud speakers.  When periodic updates were made indicating Delphos St. Johns’ growing lead over Marion Local, it became evident that the Indians were going to be alone at the top of the Midwest Athletic Conference when the evening was through.  Fort Recovery head coach Brian Patch was unaware how much more significance his teams’ victory held immediately following the game.  “I was so focused on our game that I didn’t hear the scores being announced,” he admitted.  “That usually happens during quarters or timeouts and I am talking with the team.  People had asked if I heard the score afterwards and I hadn’t, so that was great news.”

This week the 13-2 Indians will try to remain unblemished in league play when they travel to Auglaize County to square off with the 9-8 New Knoxville Rangers.  The Rangers have been searching for consistency and head coach Kort Fledderjohann hopes a pair of wins last weekend over Parkway and Lima Temple Christian will provide the first steps in doing that.  “Hopefully they are something we can build on – going into our last five games, we are really looking for that positive consistency,” he commented.  “In the games we lost recently, we have had too many turnovers and allowed too many points in the paint.  When we keep our turnovers down and play solid defense, we are very competitive.  Offensively, Andrew Arnett and Jalen Fullenkamp had good games last weekend.  They need to continue to look for their open shots and get their teammates involved when the defense collapses on them.  Defensively, Ryan Lageman has done a nice job defending the other team’s better players.”

The Indians have quietly put together one of the best seasons in the MAC this winter, as their last loss was back on December 20 against Franklin Monroe.  Since then, Patch’s boys have rolled to nine straight victories and are 5-0 in conference action.  Elijah Kahling has led the conference in scoring at more than 22 points and eight rebounds per game, while Ben Dilworth, Alex Kaiser, and Darian Sheffer have also been difficult for opponents to contain.  “Ft. Recovery is a very good team that plays very hard – their full-court pressure can be relentless,” Fledderjohann explained.  “They are a guard-oriented team and my biggest concern is stopping them from getting into the paint. They have multiple players who can get to the basket off the dribble and are very unselfish players.   Throw Kahlig, who can score from anywhere on the floor, into the mix and you have a very tough challenge for us Friday night.”

Being alone at the top of the conference and controlling their own destiny doesn’t mean anything to Patch other than each game from here on out becomes more important if not more difficult.  “Every road game in the MAC is tough and I most definitely feel New Knoxville is better than their record,” he remarked.  “I thought they would be one of the many favorites coming into this year – they have a lot of skilled kids who know the game of basketball.   Their scoring capabilities concern me with great shooters, as well as kids who can beat you off the bounce and finish at the rim or on pull ups.  This is a game we will have to play really hard if we want to win and we need to execute on both offense and defense to earn a victory – nothing is given inside “The Barn”.