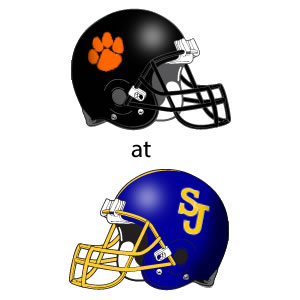 While it may seem like yesterday that local high school teams were grinding their way through two-a-days, this Friday is week ten of the regular season.  While most teams have already started printing playoff tickets and others will soon be getting ready for basketball, both the Minster Wildcats and Delphos St. John’s Blue Jays are uncertain as to what their week 11s will hold, or for that matter if there will be one.  “It has been an extremely fun process this year,” commented first-year Minster head coach Geron Stokes.  “It has definitely been a grind with the transition, but our kids and our staff have been forced to get better and it has been a blast.

For St. John’s head coach Todd Schulte, it is hard to believe the regular season is ready to close the curtain.  “No doubt the season has definitely gone fast – it seems to go a little faster every year!” remarked Schulte.  “I think confidence is a huge factor for us right now. Early in the year we seemed to wait for something bad to happen instead of just going out and playing.  I also believe that we truly figured out who we are and what we can do both offensively and defensively to stay in games.”

Both squads currently sit in 9th place in their respective regions and definitely need victories this week to harbor any dreams of advancing.  St. Johns’ chances are a little more likely, as they are just a half-point behind the team in front of them, while Minster is two-and-a-half points behind the coveted eighth spot.  Although the Wildcats haven’t been mathematically eliminated from post-season contention, they will need many scenarios to fall their way on Friday.  “Right now, we’re just focusing on the process,” Stokes explained.  “We need to continue to get better, keep developing as a group of people, and let all the other stuff take care of itself.  We’re really proud of how this group of kids has learned to battle and hopefully that will continue.”

Last weekend, the Blue Jays picked up their third consecutive win after failing to establish much winning consistency in the first six weeks.  They traveled to New Bremen and rocketed to a fast start with three touchdowns in the opening period.  When the dust settled, the Blue Jays rolled to the 48-12 victory.  Luke MacLennan had only three carries in the game, but really made them count with 112 rushing yards, including touchdown runs of 90 and 47 yards.  Nick Martz added 96 yards on four carries, while Tyler Jettinghoff added 93 yards and three touchdowns.  The victory moved the Blue Jays to 5-4 overall and it was Schulte’s 150th win in 15 years with the program.  “I’m not sure about a most valuable player for the year, but a couple of guys that have been impact players these last three weeks are Luke MacLennan on offense and Alex Haunhorst on defense,” Schulte advised.  “As a whole, our offensive line has played extremely well while defensively it has been the play of our defensive backs.”

With their 28-21 win in double overtime over the Versailles Tigers, the Wildcats improved to 6-3 overall and 6-1 in the MAC, marking the first time since 1975 that the Wildcats logged six wins in conference play.  The Wildcats piled up 325 yards of offense in the victory, led by the passing game and quarterback Josh Nixon’s 164 yards and two touchdowns.  Nixon was also one of four Wildcats to score; as he picked up a rushing touchdown in the fourth quarter and had a hand in touchdown passes to AJ Huelsman in the second period and the game-winner to Ethan Wolf in overtime.  Minster’s other touchdown was on a three-yard run by Sam Dues in the first overtime.  “We never really focus on schematics,” Stokes pointed out.  “We believe that if we play extremely hard and physical with a crazy passion, all of the other stuff will take care of itself. We are slowly starting to do that and need to continue because St. John’s is another incredibly tough football team!  Friday will be another heavyweight fight for us.  We will have to be ready to go from a mentality standpoint, but we are excited for another big-time challenge!”

Glancing over the Blue Jays and Wildcats’ respective schedules, it is difficult not to note the similarities.  Both began the season 0-2 after rough non-conference games in first two weeks.  The Wildcats and Jays also share five common victories against St. Henry, New Bremen, Fort Recovery, Versailles, and Anna, while they share a loss to Coldwater.  The only difference in their results is that St. John’s lost to Marion Local and Minster beat Parkway.  “We have seen many similar things that Minster does throughout the season against some of our other opponents, so it will not be anything totally different,” Schulte predicted. “The scores with all our common opponents has been very similar, so it should be a great game.”

The sixth Football Weekly Computer Point Ratings were released and 2 MAC schools are ranked in the top 8 in their region.

Coldwater is ranked 7th in Division V and Marion Local is the top ranked team in Division VII in the 7th AP State Football Poll.

MAC Football Game of the Week Preview – Versailles at Minster 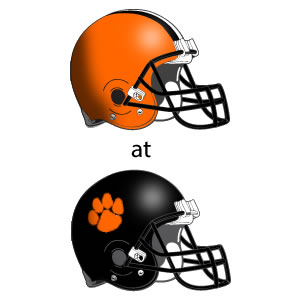 Barring some sort of monumental meltdown, the Marion Local Flyers will certainly claim the 2013 Midwest Athletic Conference title following their decisive victory last week over Coldwater.  Despite that, there is still plenty of incentive for local teams to shoot at in these final two weeks; whether it is as lofty as a playoff berth or as subtle as simply playing for pride.  For the Minster Wildcats and Versailles Tigers, it is a matter of both.  At 5-3 overall and 5-1 in the conference, the Wildcats are searching for their fourth straight post-season appearance and looking to finish with their best conference slate in two decades.  On the other end of the field, the Tigers are out of the playoff hunt, but victories in their final two games will salvage some hope in what has been a disappointing season record-wise.  Last week, the Tigers suffered a heart-breaking, overtime to Delphos St. John’s.  “We really try to focus on the task at hand which this week is beating Minster,” explained Tiger head coach Adam Miller. “They only thing we really have control of right now beating them.  We can’t work backward or forward – it is difficult not to look at the big picture and realize that we know we only have two games left.  At this point it comes down to playing for pride.”

Since losing to Coldwater three weeks ago, the Wildcats have rattled off two straight wins, including their victory last week at Barrnbrugge Park with a 35-13 dismantling of the Fort Recovery Indians.  The win launched them into the 9th slot of the region 22 computer rankings, but experts believe they need to win their final two games to assure themselves of a post-season berth.  Against the Indians, Eli and Ethan Wolf continue to devastate opponent as they combined for 11 receptions, 153 yards, and two touchdowns.  Sophomore quarterback Josh Nixon toss for 250 yards and three touchdowns, while defensively Jared Thobe and Wes Hegemann combined for 12 tackles, two of which were for losses.  “We’ve been pretty balanced throughout the year – the Wolf brothers have consistently made plays for us, plus a ton of other guys have stepped up at various times when we needed them to,” Minster head coach Geron Stokes commented.  “We like our quarterback and we like our skill kids on both sides competing their tails off, but we have to be more physical upfront on both sides of the ball to get to the level we want to be.”

Last week was one that the Versailles Tigers would soon like to get out of their memories.  Leading by as many as 14 points late in the game, the Tigers slipped up in the closing minutes and dropped a dramatic overtime decision 27-26 to the Blue Jays.  Despite the defeat, several Tigers have continued to play exceptional to this point in the campaign.  “Damien Richard has been a great wide receiver for us offensively,” Miller pointed out.  “He is our go-to guy with nine touchdowns so far this season. Defensively, Kyle Dieringer has been our most valuable player – he is the leader of the defense with 76 tackles on the year along with an interception.”

Both coaches understand this week’s meeting will hold extra incentive for their opponent and their respective teams will need to be on top of their game.  “Versailles is tough,” Stokes praised.  “They have a bunch of quality football players that play the game the right way.  It doesn’t matter whether they won or lost last week because we know their kids are going to fight.  We’re expecting a tough, physical, grind-it-out war where we have to earn everything we get.  It’ll be good for us, as we will have to match their effort and physicality.”

Miller agreed and concluded, “I think we are eager to get back out there – despite the outcome, I’m very proud of our effort against St. John’s. Minster is another big game where we have to be prepared.  We played great defensively against St. John’s, but I think the Wolf brothers will test us.  We also played well offensively, but the biggest area of improvement we have right now is special teams.  We need to improve in many spots overall – Minster will be ready for us and it should be a great game.”

The fifth Football Weekly Computer Point Ratings were released and 3 MAC schools are ranked in the top 8 in their region.

Coldwater is ranked 8th in Division V and Marion Local is the top ranked team in Division VII in the 6th AP State Football Poll. 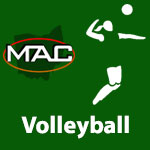 Division III Dayton B District – Miami Valley Career Technical Center
Qualifiers: Top four teams and those individuals not on qualifying teams that finish in the top 16 advance to the regional tournament at Troy.
1. Versailles 45
Complete Results